Dallas has always been a great place for innovation. In 2015 it became even better when the U.S. Patent and Trademark Office (USPTO) opened its Regional Office at 207 South Houston Street in Downtown Dallas, the only one in Texas. Texas Regional Office Director Hope Shimabuku sat down with the City of Dallas Office of Economic Development to discuss the office’s launch, its work so far, and long-term plans.

What prompted the USPTO to open a Dallas office? Director Shimabuku said that Texas generally and the Dallas area has always had a large number of patent applications filed, and they’re growing substantially.  Oil and gas patents have been the top patent category in Texas, she said. Software patents are also growing substantially, as are those related to semiconductors. Another reason the USPTO decided to open a Dallas office was the ease of getting to Dallas; 50 percent of patents are filed by residents of foreign countries (based on FY 2016 figures), so having one of the world’s busiest international airports was a huge plus. As a result, Director Shimabuku said it just made sense to locate the patent office in Dallas.

As a new patent office, Director Shimabuku says it is “in a startup state, focused on building a culture of progressiveness, with innovative ways of serving stakeholders better.” She says they want to serve stakeholders not previously reached, those she says are “underrepresented and underserved.”  Director Shimabuku believes making the office and its resources accessible to as many inventors as possible is critical. There is also a focus on “supporting students and teachers through our STEM education programs, gathering feedback from regional stakeholders, and recruiting diverse talent from the region.”

Given that a key goal of the new office is to serve Dallas’ innovators better, how can the Texas Regional USPTO in Dallas assist you? A variety of resources are available, such as step-by-step manuals detailing how to file a patent application, monthly education seminars where innovators can “meet the patent expert,” toolkits, and more. In the neighborhood? Walk-in assistance is available, or call them at their toll-free number.

As far as those monthly education seminars, Director Shimabuku said it’s not unusual for innovators to attend the same seminar several times. They do this to gain deeper knowledge about the seminar topic, as well as get more detailed answers to “their next question.” 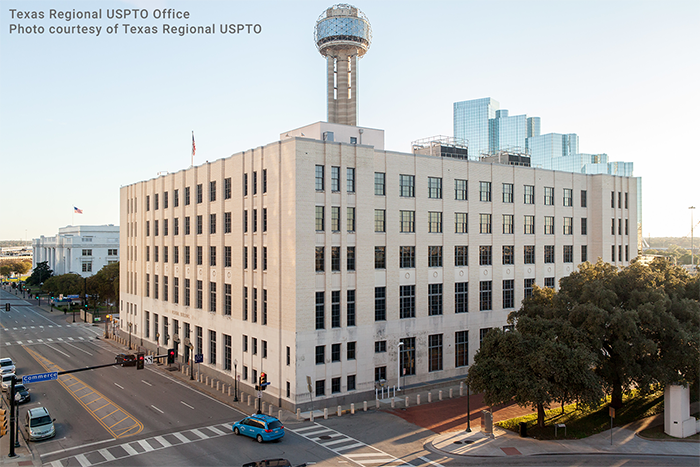 The Texas Regional USPTO in Dallas offers a multitude of resources, which is great. But what if English isn’t your first language, or you’d be more comfortable speaking or reading in another language? Good news! The Dallas office has native speakers that can help. “Our staff is very diverse; many of them speak another language and can assist customers in those languages” says Director Shimabuku. The office also provides programming in Mandarin Chinese and Spanish.  She also noted that several of their most popular written materials are available in Spanish.

USPTO has partnered with the Dallas Public Library to provide an additional Patent and Trademark Resource Center. This resource center is housed on the sixth floor at the library’s main branch, 1515 Young Street in Downtown Dallas. As part of this partnership the USPTO provided specialized training to the resource librarians, so they can better serve those using the center. In addition, the librarians have access to the USPTO’s patent full-text and image database, a source of full-text information for patents issued from 1976 to the present. Patents from 1790 to 1975 are searchable by issue date, patent number, and U.S. classification. Innovators are welcome to stop by the resource center or call them at 214-670-1468 for assistance.

Staffing a new office can frequently be a challenge, but that’s not been the case for the Texas Regional Office. Director Shimabuku said they’ve been amazed at both the quality and quantity of applicants for patent examiners, as applicants must have a strong technical background. “Since opening the Dallas office, we’ve had a new class of 25 examiners every quarter. For our third class we had approximately 1,200 applicants, with most of the applicants from Texas.” She is particularly pleased with the number of military veterans who have applied for positions. So many applied, in fact, that most of the examiners hired for the Dallas office are military veterans. The Director feels this is important, as they are a federal agency.  She added that many veteran-owned businesses are started in the Dallas area, so having staff with similar backgrounds is helpful.

When you invent something and patent it, you have to protect that patent. Because Intellectual Property (IP) theft and counterfeiting are such big issues, the Texas Regional USPTO offers training on these topics to educate innovators on how to protect their IP internationally. For example, did you know that 80 percent of all counterfeits come from China? Because of this, the USPTO conducts “China IP road shows” several times a year. The USPTO has IP Attachés based in American embassies and consulates worldwide, with three in China alone. Their purpose is to offer guidance to U.S. based companies as well as negotiate on IP-related issues.

The Texas Regional USPTO has clearly gotten off to a great start. What’s planned for 2018 and beyond? One key area will be an increased focus on counterfeit pharmaceuticals. Director Shimabuku says many Americans are going to Mexico to purchase medications, which can be significantly less expensive than in the U.S. This is dangerous, she says, as many of the medications available for purchase in Mexico may be counterfeit. Counterfeit versions can cause harm, even death, to those taking them. Educating consumers on the dangers of counterfeit drugs, and preventing their production and distribution across borders, will be key to this initiative.

Related to this effort but on a broader scale, Director Shimabuku would like to explore working with local law enforcement, focusing on counterfeit crimes. Because penalties for counterfeit crimes are less severe than many other crimes, criminals are emboldened, moving on to more serious ones. “We can provide training to local law enforcement, teaching officers how to identify counterfeit products being produced and distributed locally. Training officers on how to spot counterfeit products, especially when conducting local policing, can be very effective at reducing crime. It can also prevent more serious criminal activity.”

Dallas is home to innovation and now has even more tools to make that innovation a reality. For more information on how to work with the Texas Regional USPTO in Dallas, see below.